A CENTURY OF COLOUR

Using 11 murals and performance art, with each decade the students will explore the popular colour choices and major events of that era.

During the island’s only contemporary arts festival, Lumière brings art to the streets, shop fronts, sidewalks and public spaces of downtown Sydney.

“Because their murals were so large, the students did their prep work in the main auditorium at the Cape Breton Exhibition in North Sydney,” explained their instructor Adelle Schemm. “This is our fourth year, each year we do something different. “

“A Century of Colour” will be set up in the Coldwell Bankers parking lot on Charlotte Street.

“We started work on on the project in March and the students really got going on our drawings and paintings once we knew we were accepted into the event. The students also put a lot of effort into their costumes, which coincide with the art from each decade.”

“We all worked together to come up with ideas,” said 12-year-old Miranda Planetta. “Our message is that the world has changed over time, things are different now. Being a part of Lumiere and putting so much effort into creating something unique to show off to people, it’s great. It’s something we can all be proud of, especially with different ages working together.”

This is the first year eightyear-old Miley Taylor has participated in Lumiere.

“It’s also my first year taking art classes,” she said. “It’s amazing to be working with all these people on this big project. This is probably our biggest project yet so I’m glad to be a part of it.”

Taylor, dressed in a pink sock hop costume, and seven-yearold Adam Smith dressed as a greaser in a leather jacket, white t-shirt and jeans are excited to be performing a dance from the 1950s.

“We started out with a huge piece of white paper. The students figured out the size needed for each mural and did their drawings to depict each decade of the last century. They discussed all the important events of the various decades, picked out the ones they wanted to draw and the results were amazing,” said Schemm.

“Because there was so much they could include, that was the most difficult part for them. The focus was to capture enough of each decade to spark those memories from the various times in our history.”

In 2015, the event brought more than 8,000 people to Sydney’s downtown core. It also earned the festival its second Sydney Area Chamber of Commerce’s People’s Choice Award: Favourite Arts and Culture Experience. In 2013, Lumière was awarded the Favourite Outdoor Experience in CBRM. 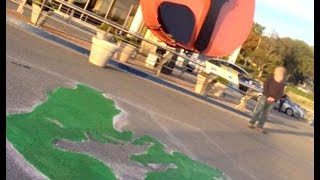 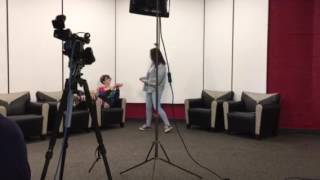 A surprise visit from Batman!